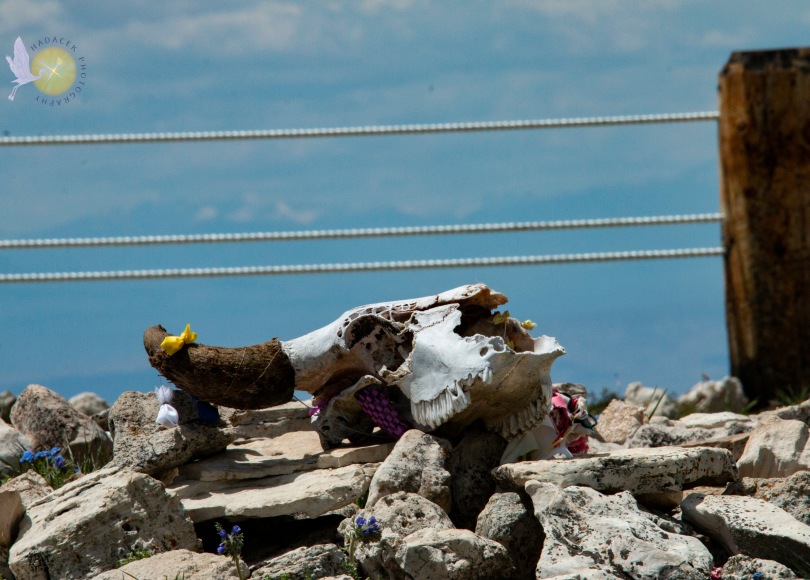 We returned to The Medicine Wheel National Historic Landmark after a 15-year absence. The mile and a half hike to the site seemed easier this time, and we didn’t run into the same violent afternoon storms as we did last time. Of course, we went a little earlier in the day this time, just in case.

Last time, there were many more prayer tokens around the site. There were strips of fabric tied to the ropes, each representing a prayer. There were also offerings left around the perimeter, such as prayer bundles, tobacco, or small coins.

Apparently, many of those were left by visitors of the site, and they aren’t allowed to do that anymore. Only Native Americans practicing their native religion can now leave any prayer bundles or offerings, and those are generally inside the stanchions. So this time, there were fewer visitors, prayer flags, and offerings.

According to the ranger, the cairns were much taller in years past, but tourists would take home stones from the structure as souvenirs. When their conscience bothered them, they would mail them back to the site. That’s probably why they have stanchions up around the Medicine Wheel now and a ranger always on duty.

To really get an idea about how the wheel is laid out, I encourage you to look here, at a website that had a good view from above the site. It is hard to see the whole pattern at ground level, particularly if you are a bit vertically challenged like I am. The website also gives a good description of why the wheel is there and what the cairns symbolize. I won’t plagiarize here; I encourage you to visit their site. I was interested in the astronomical significance of the layout. I don’t think they really know how old the site is; I read in various places that it was anywhere from 7000 to 1500 to 500 years old.

I enjoyed the beautiful area around the wheel and the feeling of place in the area. I looked at the rock formations to the west, wishing to visit them, but the ranger on duty said that they were off limits. She said it was an area of preparation for those participating in ceremonies at the Medicine Wheel.

Early in the hike, we were visited by an area fox, but as we continued our walk, I thought about how dedicated the Native Americans had to be to make the long hike to such a high, remote area (9,642 feet elevation) where the Medicine Wheel was laid. It was a long stroll for me from the parking lot, but for them, it was the culmination of a trip that was significantly longer and harder.

The site pre-dates horses in the area so they would have walked the entire way. The thought of having to do that each year –without a map –was daunting to me. Sure, they had an oral history, and with each trek the way was etched into the tribal memory, but it still sounded difficult to me. The summers are short at that elevation and filled with other activities to store food and supplies for the remainder of the year. I respected the way their spiritual practices were such a high priority.