All of our fur and feather family members have a story about how they joined our family. Some were Craig’s list rejects or rescue society guests before coming to our home. Ember was different. We all felt strangely compelled to visit a gentlemen’s farm a couple of miles from our house with a new litter of red standard poodles. We felt like one was 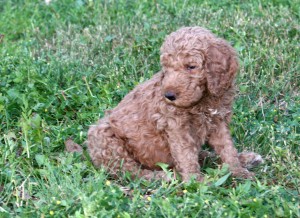 meant for us. We met the owners, toured their lovely acreage, talked to the parent poodles, and put down a deposit. When it was our turn to choose which puppy would be ours, I kept thinking the puppy that wanted us would give me a sign. I expected it to lick my face or something sappy like that.

Well, half of the puppies ignored my family and I, running in another direction, quickly narrowing our selection pool. We wanted the puppy that wanted us as much as we wanted her. The remaining puppies all licked my face, without fail. What was plan B? One puppy, the owner’s favorite, was not as strong as the others, nor as agile. She’d gotten quite a bit more lap-time than the other puppies, we could tell. The owner tried to hide her, actually. But when we asked her to set her down

with the other puppies, the puppy tottered over to me, raised up, licked me in the face, and then whispered in my ear. She had me at the whisper. She proceeded to charm the rest of the family in turn, and we knew which one was meant for us.

In the ensuing two years, several veterinarians examined Ember. One called her “mildly retarded” while another said she was “autistic.” Hmmm. What does that mean, in a dog? We lovingly thought of her as our space cadet, and moved on. She was not the sharpest knife in the drawer, but we loved her all the same. After all, we don’t expect our dogs to do math, and you don’t have to be a genius to have a good heart. She was a bit aloof a lot of the times, and we had to work hard to deal with an overgrowth of hair and yeast in her ears. We were on the right treatment, with the help of a veterinary dermatologist, and Ember was genuinely relieved.

She loved rides in the car and had a special relationship with Nutty, our silky terrier. They were devoted to each other.

Our other dogs are small, so Ember has enjoyed being the tall one. She was an expert counter-surfer and trash stealer. She could open all the doors in the house! Just because she opened the door didn’t mean that she would want to go in, she just didn’t like closed doors. I admire her hutzpah – she would not tolerate being excluded. This was a bit surprising, because she was more aloof than our other dogs, as if she wasn’t sure what to do. But as we persisted to incorporate her into the pack, she seemed so thrilled. The first

time she got a shower like the other dogs – or was chosen for a road trip – she seemed so proud. She strutted, as if to say, “See, I’m one of the pack!”

Whenever my husband or I come home, all the dogs meet us at the back door, jumping, barking, excited. Garnet actually howls, ah-rooo, like a beagle she once knew. Ember would be just as excited as the others, but quiet. She’d always jump up on me and whisper in my ear, which I thought was charming, still. What kind of secrets did she have for me?

I was out-of-town last week on a business trip which I expected to be uneventful, and it was. But there were events at home, which I missed. My dogs, cats, and birds are part of my family, so I was disturbed when I called my husband at work on Tuesday last week, and he told me that Ember had thrown up the night before and again that morning. She seemed okay, he thought, but he wanted to keep an eye on her condition. Had she eaten grass, foraged in the litter box, or was it more? He’d check on her when he got home. Worried, I called my youngest daughter, who was already home from school, and asked if Ember had greeted her at the door. She hadn’t seen Ember since she’d gotten home, which wasn’t a good sign. When my husband called a little later with bad news, I knew it was really bad. Ember had inexplicably passed. It looked like she took a nap and never got up again.

I was shocked, I have to say. Normally, there’s some sort of internal foreshadowing that something like this was coming. There’s a hint or clue, such as a heart condition or a sudden illness. I had two prescentient dreams before Pixar passed. Dog vomiting just isn’t that unusual in our house. The dogs are adventurous eaters and sometimes this lands them in trouble. (Remember Tribble, who barely survived septic shock after eating a robin with salmonella?)

I like to write, where I can think things out and rearrange the paragraphs. I can mull my word choice and seek out the best tone. An introvert at heart, I’m not that good talking on my feet when I’m on unfamiliar territory. My husband had to deliver the news to me, our youngest, and our middle daughter; it was up to me to tell our oldest daughter (and later, our son). Our oldest felt a special kinship to Ember, and took the news pretty hard. In case I need feedback, she later told me that I totally suck at giving bad news. Yeah, I bet I do. It wasn’t any fun on my end, either. I could barely handle my own grief and didn’t properly think about hers. Sorry, honey. Next time, I’ll let my husband do it.