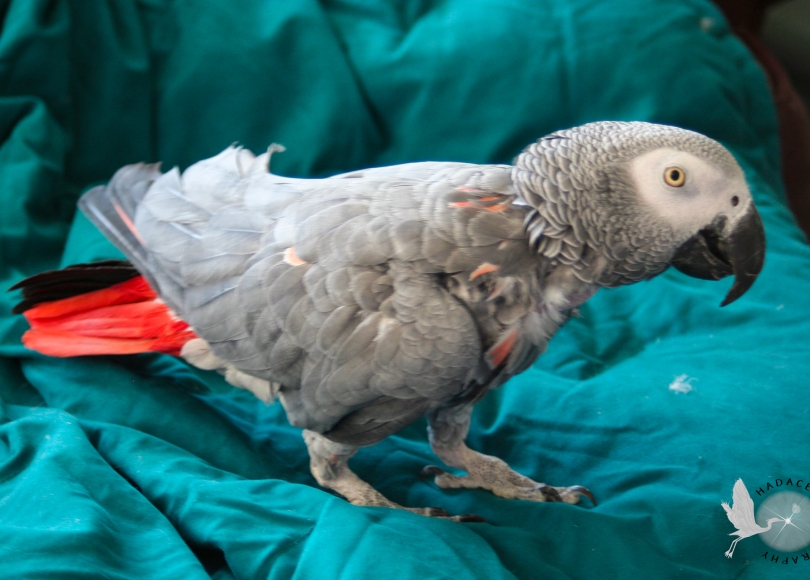 I’ve dreaded writing this post, but I can’t avoid it any longer. We lost a member of our flock a couple of weeks ago. We found Ruby, our African Grey, dead on the floor of her cage. As a rescue parrot, she came with a history that we only partially know. As prey animals, birds are experts at hiding any illness, and she displayed no symptoms of being ill except for needing a beak trim now and then. When we took her in as a rescue, we were told that she might have fatty liver disease, and gave her the suggested holistic treatment. She didn’t display any further symptoms, but it must not have been enough. African Greys in captivity can live to be a hundred years old, so either she had fatty liver disease that was much further advanced than we knew or something else happened. We’ll never know. Ruby was only 16 years old, and we didn’t expect to lose her so soon. I am somewhat consoled by knowing that her five years with us were happy ones.

Sugar, our cockatoo, has been grieving, avoiding contact with the rest of us for the most part for the past two weeks. He has just now begun to come around for snuggling and scritching again. Although he and Ruby weren’t mated, they enjoyed flocking together to watch cartoons on television, and he has obviously been affected by her passing.  As our alpha bird, Sugar bullies any bird that he thinks competes with him for my affection, so I had to keep a bit of an emotional distance from Ruby, although I’ve been responsible for her daily care for her time she with us. Since she my husband adored her and spent time with her, I knew her emotional needs were met.

My husband had wanted an African Grey parrot since before we married, and he was so happy to add Ruby to our family. She accepted him as her person and enjoyed being special with him. Ruby was a wonderful, gentle presence in our home. She is missed.