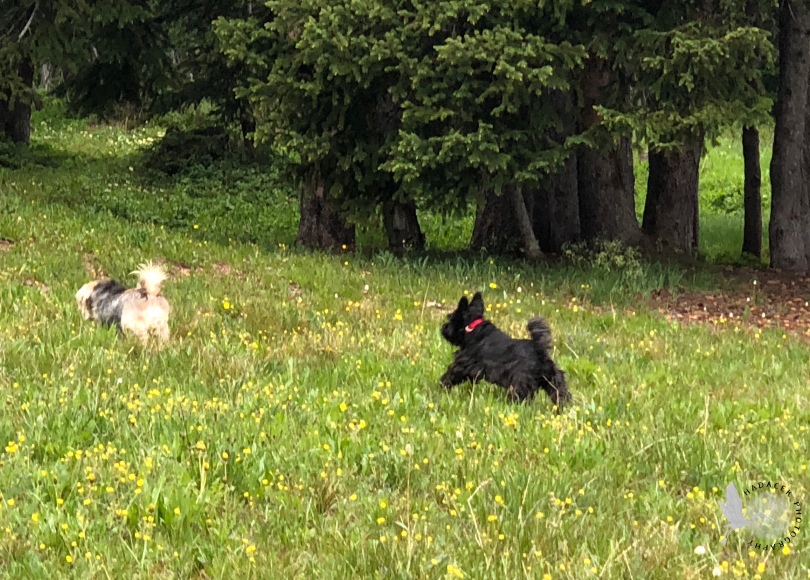 We received a foot of new snow the other night. The following morning, my husband shoveled a dog’s path from the dog door to the backyard’s open area. Garnet, our miniature schnauzer mix, is maybe 12” tall at the shoulder, a petite senior. She confidently trotted down the shoveled path and took a left turn at the usual place to begin her yard tour. This time, she stepped into a deep trough of snow over her head. She floundered for a moment, panicking before she jumped up onto the porch and beelined to the back door. Seeing she didn’t need a rescue, I let her in and dried her off. It was hours before she was willing to brave the snow again for an urgent potty call, careful not to leave the shoveled path.

The next day, she walked out of the dog-door and surveyed the snow around her. As she sat, looking around, I saw a familiar emotion on her face: it’s scary to be a Piglet in a Pooh world.

My oldest child loved Winnie the Pooh cartoons. Pooh was the main character, good-natured and fitting perfectly in his world. His best friend, Piglet, though, was small and vulnerable. Everything was too large for him. For every step Pooh took, Piglet took two or three. In the episode Pooh and the Blustery Day, Piglet is blown around by a capricious wind. When I saw it, I knew that I’m a Piglet. I grew up in West Texas, where a stiff wind always seems to blow. Walking home from school as a youngster, I faced a stiff headwind every day; sometimes, I wasn’t sure I could make it home. I was so small, and the wind was so strong. I related to poor Piglet being blown hither and yon, with no control over his world.

As a young adult, I often felt the same way. I’m only 5’1” tall, and all the adults in a room are taller than me. I worked in a predominantly male field for many years, and I was usually the only woman in the room. I often felt like Piglet in a Pooh world. Small, vulnerable, and inconsequential to the big Poohs around me. I was never going to be as tall as them or be equal (in their eyes) to their gender. Over a decade after college, I returned for more education, hoping to find my place in the world. The knowledge I gained in law school was good, but the confidence I earned with that J.D. was probably worth even more. I was still short, but I didn’t feel quite so vulnerable.

Garnet was my emotional match. She had a difficult life before we took her in when she was around 2-3 years old. Her anxiety made her violently car-sick on the way to our home. She had never walked on a leash, and it freaked her out. She would slink away if we looked at her and run away if we called her. She felt small, vulnerable, and afraid in a world outside her control.

Ten years later, she looks a bit cocky as she prances around with a stuffed toy, and it fills my heart with joy. She earned that prance! But she still runs when we call her, fearing a beating that I suspect she always got in the home before ours. She’s no longer car-sick on a drive, but she’s still a bit anxious. She still feels vulnerable, and that tumble in the snow was another reminder that there are scary hazards everywhere. She feels secure in our home, but that’s about the only place. She’s still firmly on team Piglet.

That’s okay; we love her dearly. We do our best to help her feel secure enough to gently stretch into new things. She finally walks comfortably on a leash, but she’s afraid of other people, dogs, or anything unexpected. She’ll never be a Pooh, and we hope that the love and security she experiences at home will someday allow her to be a cocky and jaunty Piglet, everywhere she goes.