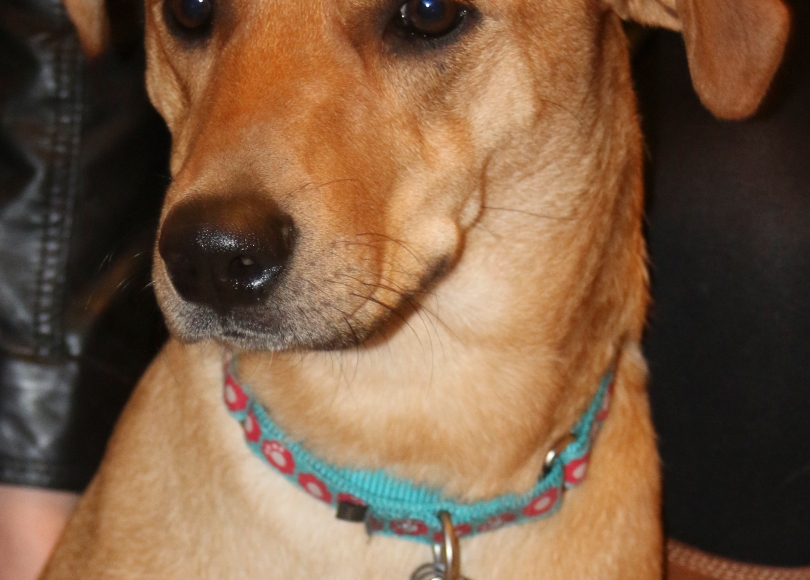 It’s easy to talk about love, and it’s another thing to live it. Many times, love doesn’t look all that fun and smells strongly of responsibility, dependability, and a loss of freedom. I have four wonderful children, and my love for them often looks that way, and I never know if they understand. And then, something happens, and I realize that they get it.

My daughter, Kinsey, had a serious boyfriend for two years, and during their time together, the boyfriend adopted a dog. Kinsey took the time to train the dog often took care of her. The relationship didn’t last, however, Kinsey’s been dealing with a bit of a broken heart. A week or two ago, she learned from a mutual friend that her former boyfriend had to move into a small apartment and he returned his dog, Aliana, to a rescue organization. Kinsey quickly located the dog on-line, and noted she was still available for adoption. By the next day, our home had a new family member – Aliana.

Now, we already have lots of animal companions in our house, and we weren’t looking for another one.  But we believe in living our values, and could see that Kinsey was hurt that Aliana had been abandoned. She had missed her in the months they’d been apart.  So, we’ve made room. Kinsey is buying her food and toys and taking care of her.

Our existing dogs have graciously let her live with us, with the understanding that she sleeps with Kinsey rather than encroaching on their sleeping arrangements in the master bedroom. Aliana has discovered the dog door into the back yard and loves the freedom to run in and out. By the looks of it, Aliana is a happy pup. She’s playing with the other dogs and her tail is beginning to wag a lot more frequently. Sometimes, the tail wag gets the whole back end going!

Kinsey told me that she had wanted some carefree years, as she is finishing her college degree. She had planned to move to her own apartment this month. She didn’t want to be tied down to a home, a schedule, or someone who depended on her. She was also a bit tired of living with her parents. But she also took her dedication to Aliana seriously, and has assumed her care. Having Aliana sleep with her, snuggling their evenings away, may be a nice antidote to a bruised or broken heart, too. She found out that the place she’d planned to rent wouldn’t take dogs, so she decided to live at home a little longer. She wasn’t going anyplace her dog wasn’t welcome.

Kinsey looks happier these days, too. She and Aliana have become a pack of two, supporting each other through a young man’s scorched earth policy. The love of a wonderful dog is working a little magic on Kinsey, just as much as her love for Aliana  is bringing a smile and a wag to the pooch. It is a love story, after all.

Aliana’s arrival was just in time to model the green bottle opener sent to me by Animal Couriers in France. They’d had the bottle openers made recently with their logos, with the intent that our dogs would always be able to assist us with a cool beverage this way. My dogs and cats are too small to support such a large collar ornament. Aliana, though, is just the right size. She happily modeled the gift. (Details may be found here.) Thank you, Animal Couriers!