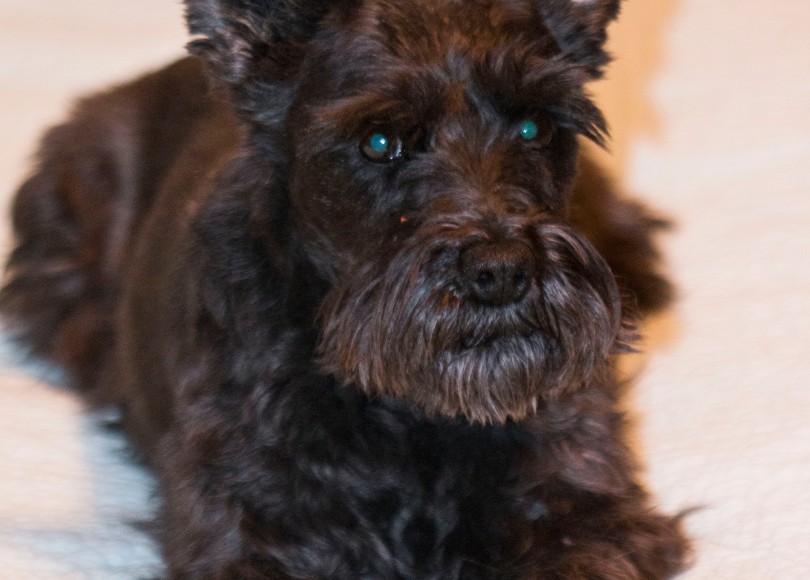 Garnet has been a complex dog from the day we got her. She was quickly confident and happy at home, but when we took her away from the house, she was so sensitive and shy that everything scared her. She hated the leash, (see Brave Little Garnet) but we got her to accept it, and we got her through a grooming crisis (see When Trust is Broken). Although quickly car sick when we first got her, we were able to acclimate her to the car enough that she would tremble and cower, but not vomit.

Due to her unwillingness to ride in the car and walk on a leash, I considered leaving her at home and taking just the dogs that liked it. Another one of my blogging friends wrote about how unfair it is to a dog when an owner doesn’t work with them to get over their fears. A good owner, she said, acclimates her dog to these types of problems so that they don’t scare her. Taking her advice to hart, this winter I and spring, I worked with Garnet to become a more confident rider and walker.

I took her in the car to our local park, about five minutes from the house. This helped to her to associate something fun with the car ride and kept it short so that she wasn’t overly anxious. While walking, Garnet was afraid when the bicyclists or skateboarders rode up behind her and pass her, so I kept an eye out for them. When I saw one approach, I calmly moved Garnet off the trail so that she could sit and watch them as they peacefully passed us. Once gone, we resumed our walk. She seemed to enjoy these walks, which encouraged me.

I took her on a longer car ride to a state park. Garnet trembled and cowered for the entire drive, but she seemed to like the trail. There were no skateboarders or bicyclists to startle her and there were plenty of interesting smells. We often took her out with her daughter, Tribble, whom Garnet is especially close to. I hoped it would comfort Garnet to have her best friend with her.

Jazz is our the only dog in our pack that remembers what it’s like camp, and he’s been telling the other dogs unbelievable tales all week. Finally, the final exam arrived when my husband and I took our youngest child and four dogs on a camping trip about an 8-hour drive away. We took our truck and new camper, and I sat in with the dogs in the back seat to comfort and deal with any canine emergencies. Eleven-month-old River gets violently car sick, and I wanted to be there to help her. An hour before we left, I gave her a product called Happy Traveler to reduce her anxiety. Unlike other products, it didn’t make her sleepy. Garnet didn’t need a product like that; she just relaxed and laid down the whole trip, no longer trembling in the car. River drooled a little and then slept – no car sickness. Success!

All the dogs seemed happy to go with us on vacation and our preparations had paid off.  Finally, Garnet trusted us, River relaxed, and the dogs seem to be veteran travelers; riding in the car just puts them to sleep now. For some reason, I think that having our whole pack (humans and dog) helped to calm them.

I’ve enjoyed taking our dogs on vacation, and I’m proud that Garnet finally feels like she can do as much as everyone else! River is feeling success in the car and I will test her on shorter runs to see if she is over her car sickness and we won’t need the Happy Traveler any more. I’m glad I persevered to help them be more confident and successful. We have a happy pack!