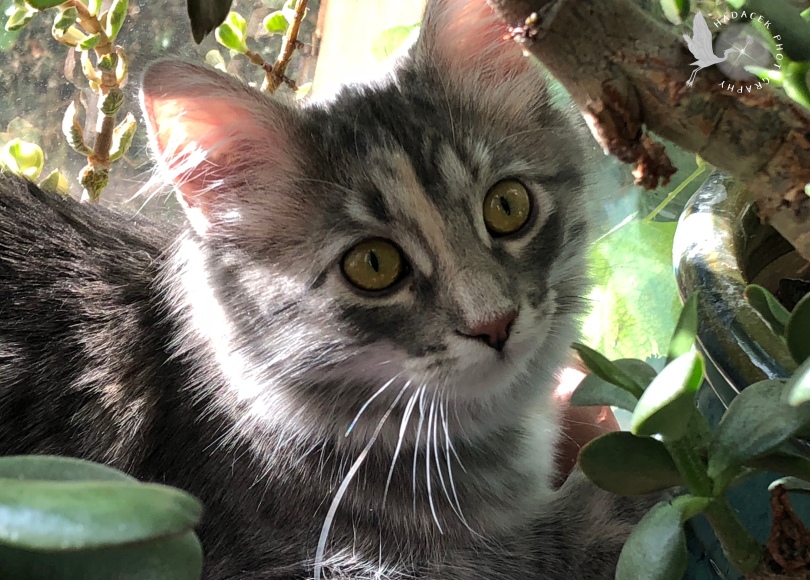 During the four-and-a-half weeks that Nami was missing (see Nami on the Loose here), my husband and I took many trips to the local shelter to see if she had been brought in. I enjoyed petting all the cats, and if they did not indicate they wanted to be alone, I hoped that I brightened their day with a little attention. One day I saw a kitten that I recognized from the lost room the week before. She was unclaimed and up for adoption. I remembered her trying to get my attention in the lost room, and I steadfastly looked away. She wasn’t Nami, so I wasn’t interested. Now, though, I could pet her, and I was equally drawn and repelled. She was sweet and friendly, but her hair was longer than what my husband and I could accept, and I was afraid that I would like her too much. I continued my rounds with the other kitties.

My husband and I are both allergic to cats, so we minimize the discomfort by sticking to short-haired cats, hoping that reduced the allergens. A long-haired cat was out of the question, and we were not there to adopt. But after touring the facility, I was again drawn to the gray kitty with longish hair. The shelter’s write-up said she had “medium hair.” Close enough. She was so affectionate, the purring started as soon as I picked her up. She made overtures to my husband. We were smitten.

Although we adopted Mystic, we were still actively looking for Nami and hoped she would come home. What would happen when she came home and found another cat? We felt so strongly that Mystic was the right cat for us, we took her home anyway. I showed her all the catification features around the house that gave her sanctuary from the dogs – high shelves just for cats and a room with a large window but no dogs. She loves these, but her favorite by far is the cat tree my husband made from natural aspen. It gives her a highway to the second floor without using the stairs as it rises from the main floor to the second in our living room with the vaulted ceiling. When the dogs get to be too much, Mystic has places to hide.

Honestly, the dogs aren’t a problem, it’s just that River LOVES cats and wants to play. The other dogs are older, and young River is looking for a little action. “Will the kitten play, mom?” River asked, wagging furiously, ecstatic with the new addition. Her enthusiasm can be a bit overwhelming at times, though. Mystic loves having her hiding places that River can’t reach.

When Nami finally came home, Mystic was all, “Hi! I wondered where you were. Your scent is everywhere….” Nami was like, “Who the hell are you?” But within days, it was all just fine. Mystic never challenged Nami, conceding she was in charge, so there was really nothing to fight about. Now, we see Nami trying to play a bit with Mystic. Sometimes it looks like she is trying to remember how to play; she looks like she’s a bit rusty but giving it a try!

We were worried that Nami and Mystic wouldn’t get along, but it hasn’t been a problem. Once again, we’re a two-cat household, and it feels good. We see more of Nami, now, and Mystic’s purring and affection is always welcome.