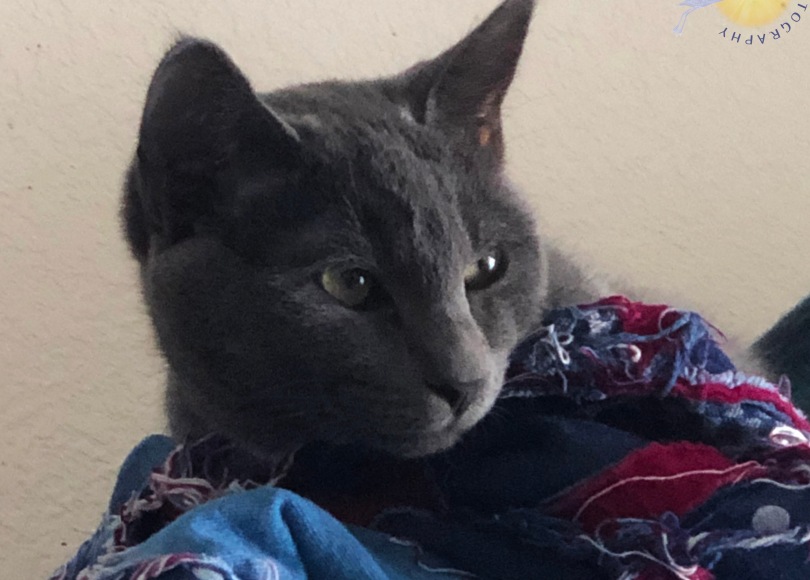 Gracie joined our home pack in August, and it was clear that she wasn’t accustomed to dogs. We knew that she was shy and sensitive when we got her, so we’ve been patient, knowing she needed time. We gave Gracie my husband’s home office as a safe room.

We kept the door shut for a few days as she adjusted to him and me and the sounds and smells of our home. She would freak out a bit if the dogs barked at someone at the door or if when parrots squawked at sunset. Eventually, we left Gracie’s door open with a baby gate keeping the dogs out. Gracie could see them through the gate but feel safe.

I worked in the room occasionally and let the dogs join us during their afternoon naptime. That way, they would be near Gracie at their most non-threatening time. River was so excited to meet Gracie! She wanted nothing more than to be Gracie’s best friend, but Gracie was terrified. She is a small kitten and River is a tall standard poodle; her size was intimidating.

River knew just what to do, though, and she spent hours laying outside Gracie’s room trying to look small. She’d watch Gracie through the dog gate, and when Gracie watched her back, they were eye-to-eye. If I let her in, she’d walk into the room and then immediately lay down on her stomach, so she was more approachable.

Little by little, River and Gracie became good friends. Now when they see each other, they pause for a little nose-kiss!